A stunning four star country house hotel with rich history and stunning grounds.
We remain open for stays for Business Travellers in lockdown. Book now for your stay from 17th May.

We are open for Outside Dining on our Terrace.
The Country Kitchen and Oak Room will reopen from 17th May.

Our Spa is open for treatments and Private Spa Days.
Spa Days under the Rule of 6 will be allowed from 17th May.

Attractively landscaped grounds in the Summer and open fires and oak panelling in the
Winter set the perfect romantic scene for your wedding.

Hotel » About Us » Our Gardens & Grounds

As a guest at Moor Hall we invite you to take a relaxing stroll and discover our beautiful grounds, whatever the season.

From the lounge bar or conservatory doors, walk down the scented rose path, past the magnolia tree, through the ancient arch and sit a while in the enchanting historic Sunken Garden. From the Sunken Garden, climb the ancient stone steps and follow the path as it weaves through the natural woodland which is home to a variety of mature trees and lots of wildlife. It's a haven of peace and tranquility, disturbed only by bird song and the sound of the wind in the trees. 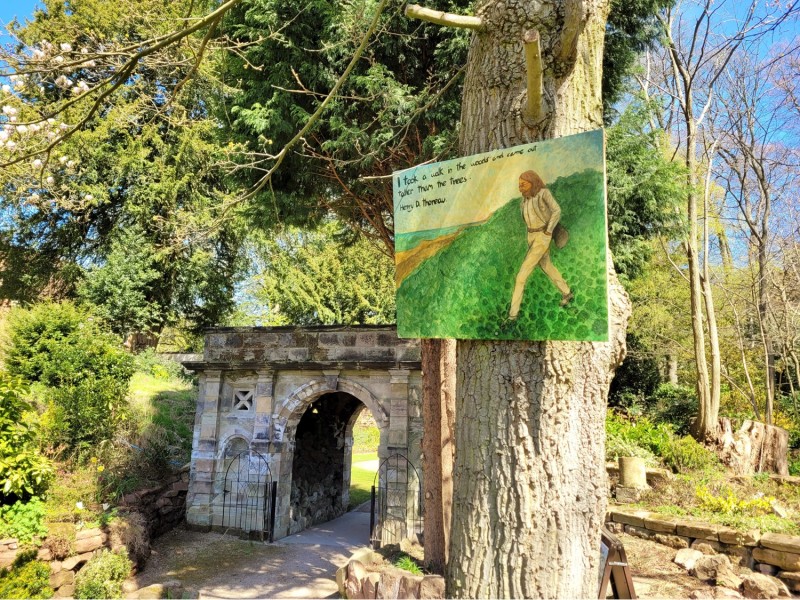 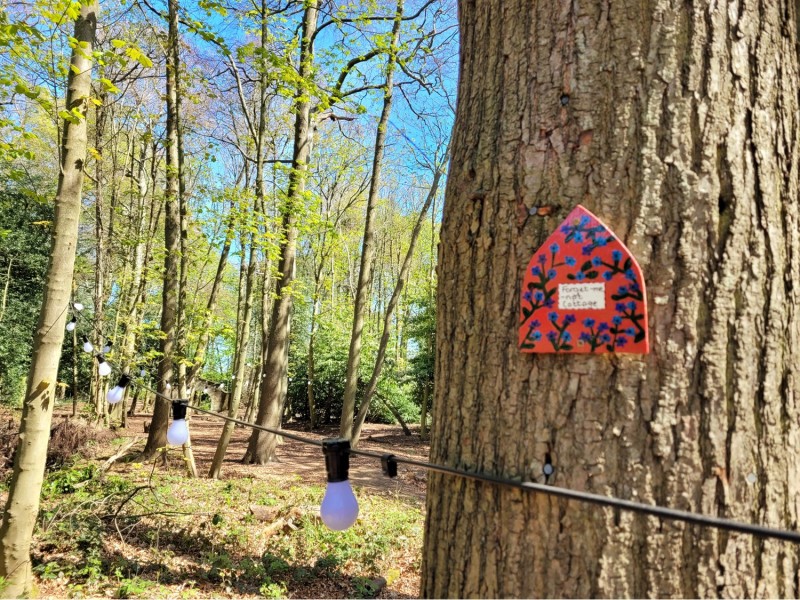 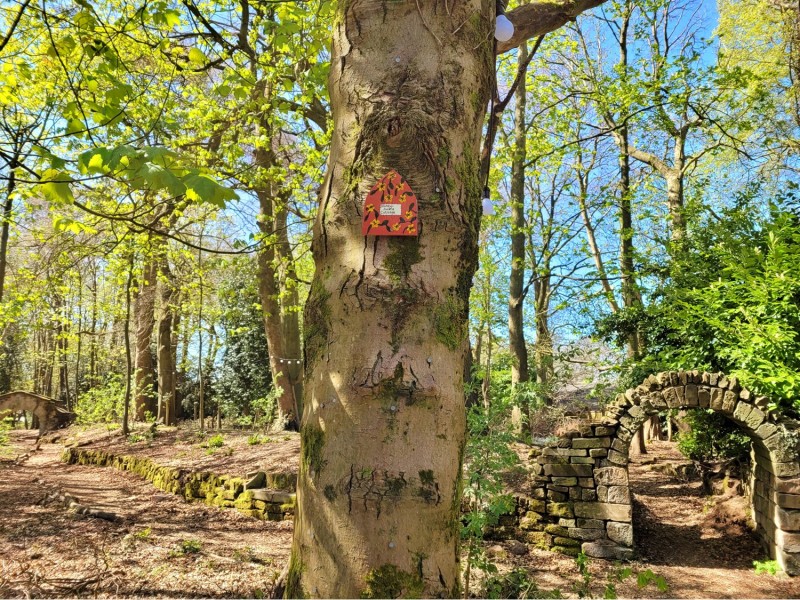 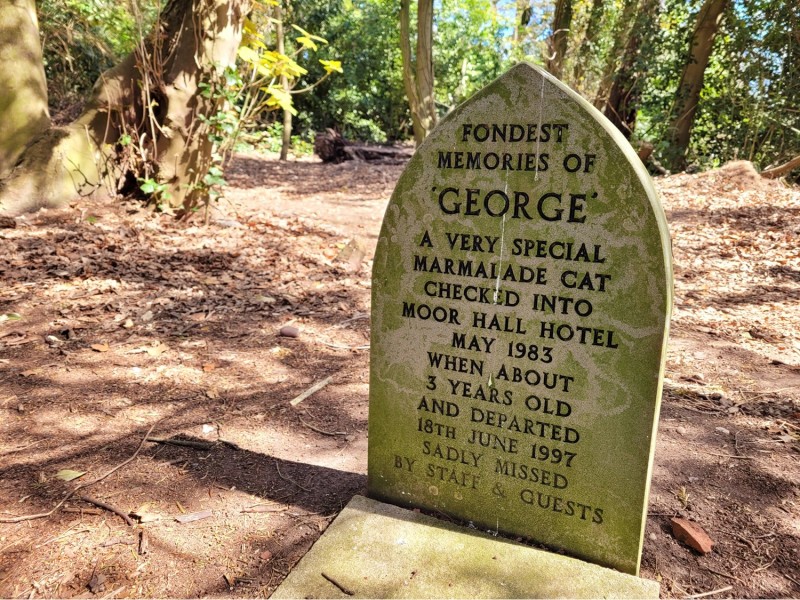 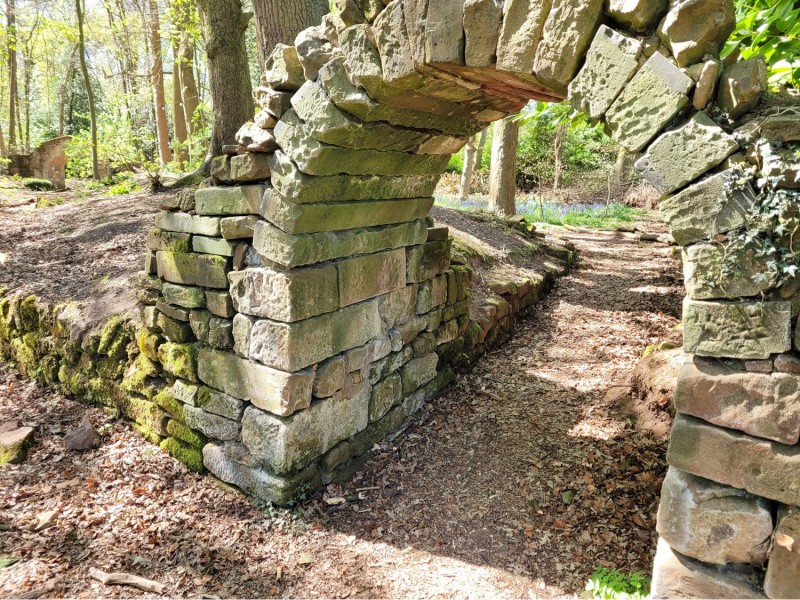 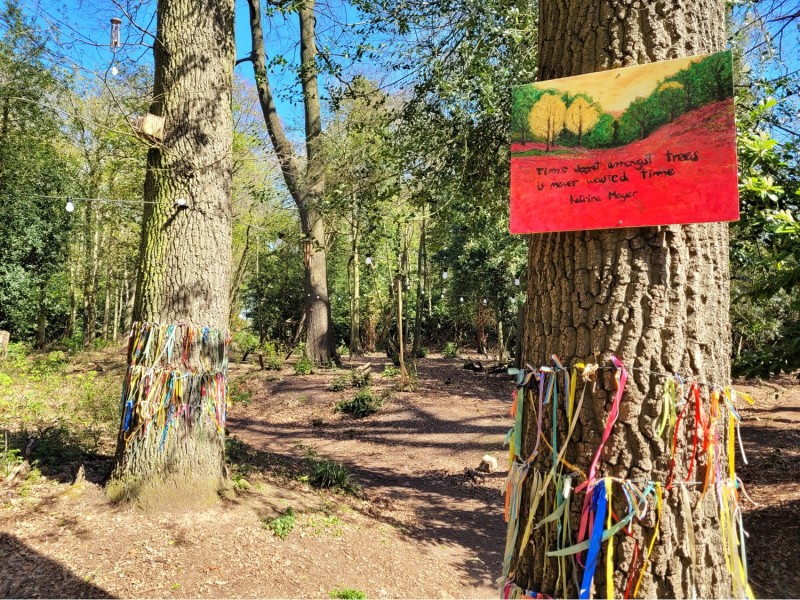 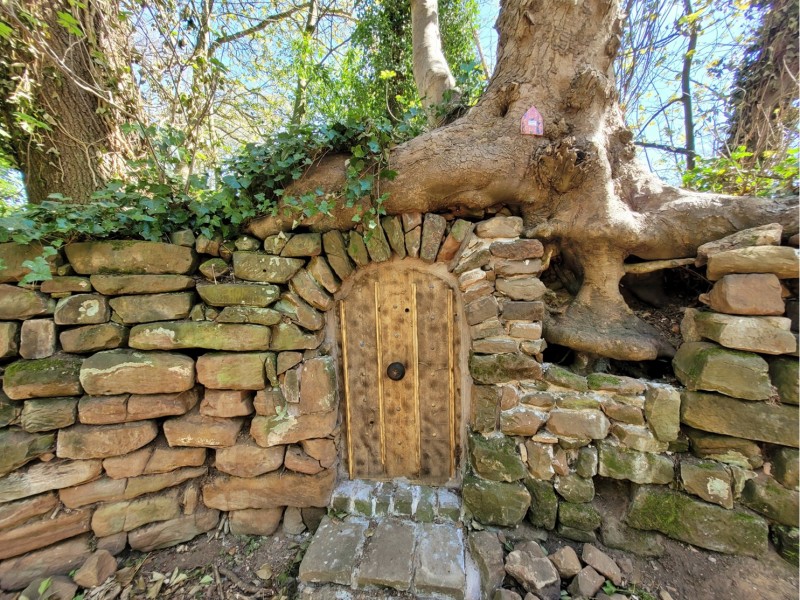 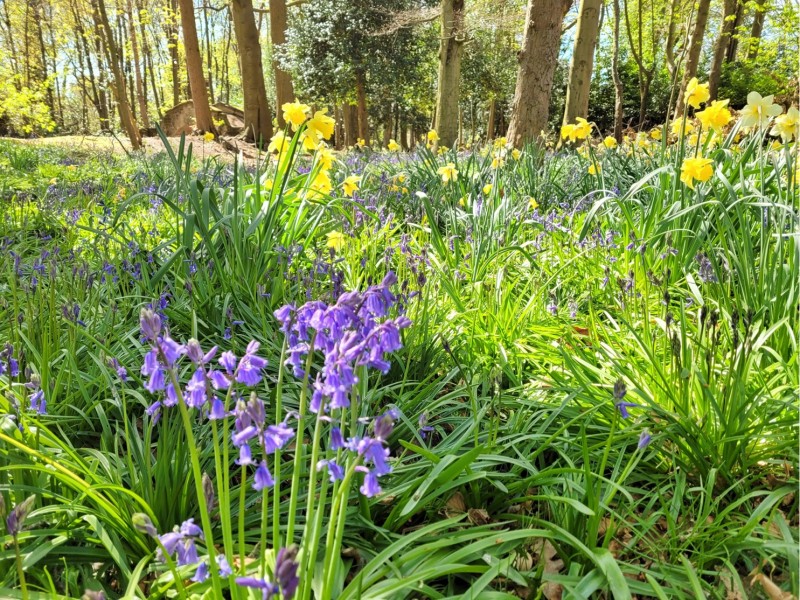 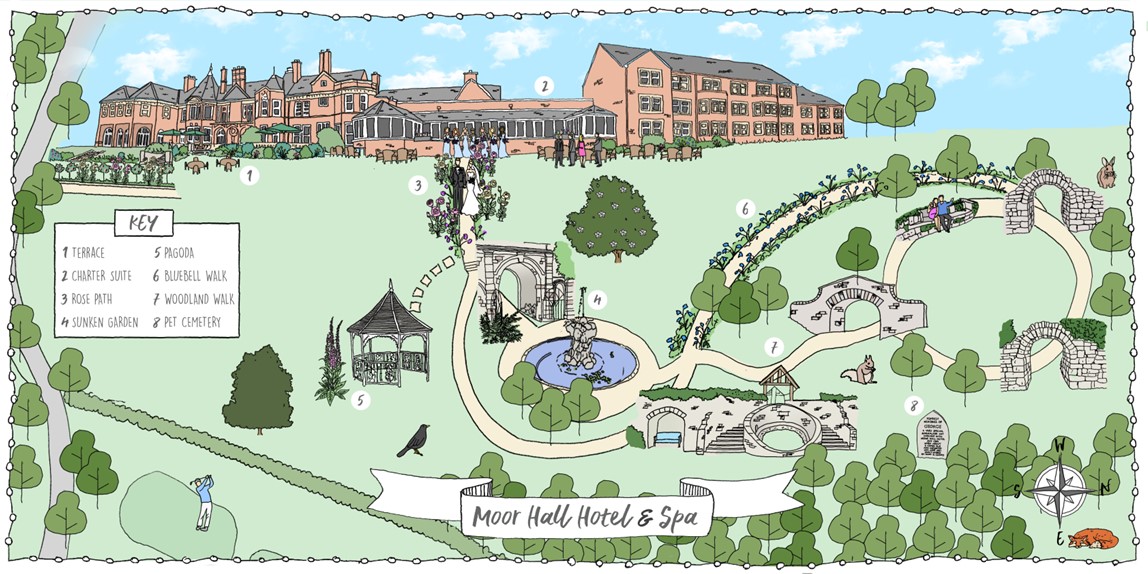 The Sunken Garden at Moor Hall is a magical place to visit. Enter through the stone arch to see the sweeping double stone staircase, fountain centrepiece and Victorian grottos. At the entrance stands a magnolia tree which in springtime is in full bloom. Seasonal shrubbery borders and walls, built using stones from old local buildings, surround the Sunken Garden, alon with woodlands with yew and hazel trees, making it a striking setting.

Records show the Sunken Garden was formed in around 1750 as a cock pit or bear pit. It was altered to a sunken garden in the late 19th century and it was popular for Victorians to add features like grottos and fountains to the garden.

Couples can now get married in the Sunken Garden and it makes a stunning backdrop for wedding photos. 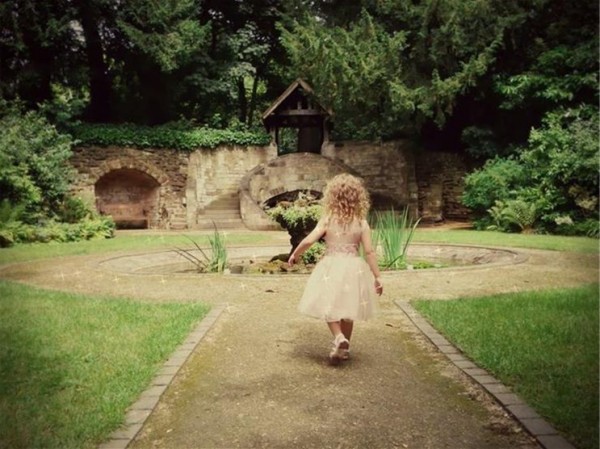 The Fairy Door Trail at Moor Hall starts at the big tree on the lawn. Follow the path on the right hand side of the Pagoda and take a walk through our woodlands to see if you can spot all 18 fairy doors.

We'd love to see your photos of our Fairy Door Trail so please tag @moorhallhotel in on social media and use the hashtag #fairiesofmoorhall. 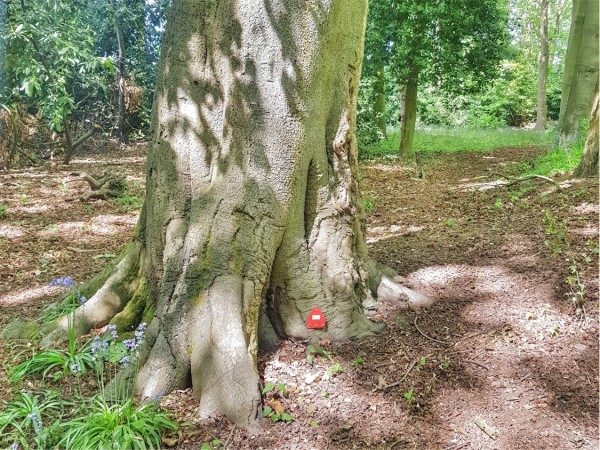 We invite our guests to take a relaxing stroll and discover our beautiful grounds at Moor Hall - whatever the season.

Our new Wellness Walk is an excellent way for guests to clear their minds and enjoy the natural woodlands at Moor Hall. From the lounge bar or the conservatory doors, walk down the rose path, past the magnolia tree, through the ancient arch and sit a while in the enchanting sunken garden. Fron the sunken garden, climb the ancient stone steps and follow the path as it weaves through the natural woodlands which is home to a variety of mature trees and lots of wildlife. Listen out for the windchimes and restore your sense of peace and focus. 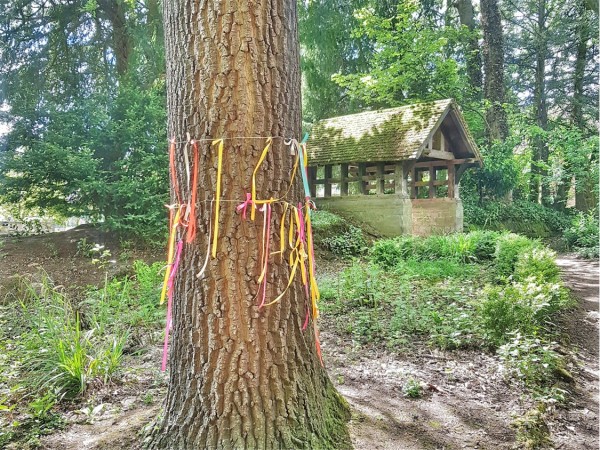 As part of our celebration of 50 years of family ownership, in April 2010 we started work on the densely overgrown woodland within the hotel grounds in order to restore the area to its former glory.

It took the removal of over seventy laurel bushes and several tons of decomposed leaves to reveal a serpentine pathway, stone arches and what was once a shrubbery garden. These are all encircled within a low stone wall, which was built from the stones from a demolished building - markings can be seen in the stone work from the mason’s original work.

There are several features to look out for in the woodland, including the Monkey Puzzle tree at the centre of the three stone arches. One arch leads to the bluebell wood and another is built under the roots of an eighty foot horse chestnut tree (or was it the other way round?) If you are lucky, and the light from the sun catches the tree at the right time, you will see a face looking over the garden! Two of the stone arches have been rebuilt as time had taken its toll on them. There were no photographs to work from but what remained was sufficient for the team to reconstruct them to their original state.

New shrubs and trees have been planted and the rose garden was officially opened by Andrew Mitchell MP in June 2011 as part of our 50th anniversary celebrations. Stone seating has been created and the ¼ mile serpentine pathway has been defined using the cut down logs from the wood, making the woodland a relaxing and tranquil place for all our guests.

As part of our Green Programme, in the thicker part of the woodland we are also building habitats for the wildlife by using the branches that have been taken off the removed laurel and creating piles covered in leaves. We are also making new bird boxes and bird tables and attracting bees into the field by planting flowering plants.